Back in the 1990s there were a huge prevalence of exciting bike frame designs - using non traditional frame geometries and shapes in the cycling and triathlon worlds.

One of the most iconic bikes was made by Lotus, and the Lotus 108 track bike was piloted by Chris Boardman to his individual pursuit win in the 1992 Barcelona Olympics against Jens Lehmann.

Made from carbon fibre, with an offset rear wheel and monostay design (the left hand chainstay and seat stays were removed, as well as the left fork leg) after this success the Lotus 108 was updated to the 110 - but much of the design and general shaping was retained.

This new design was again ridden by Chris Boardman to Tour de France prologue victory in 1994, as well as his "ultimate" Hour Record distance of 56.375km. 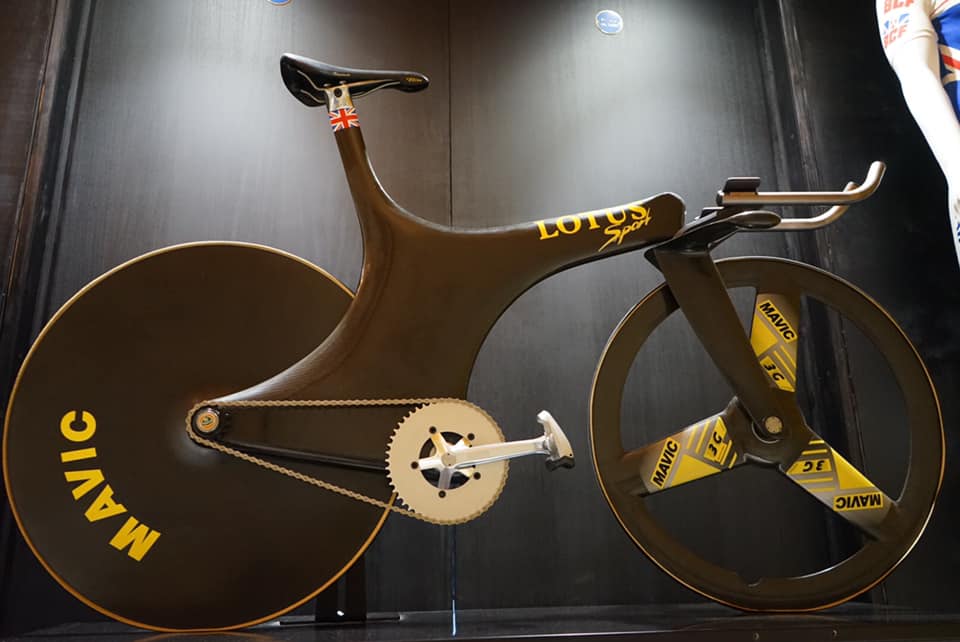 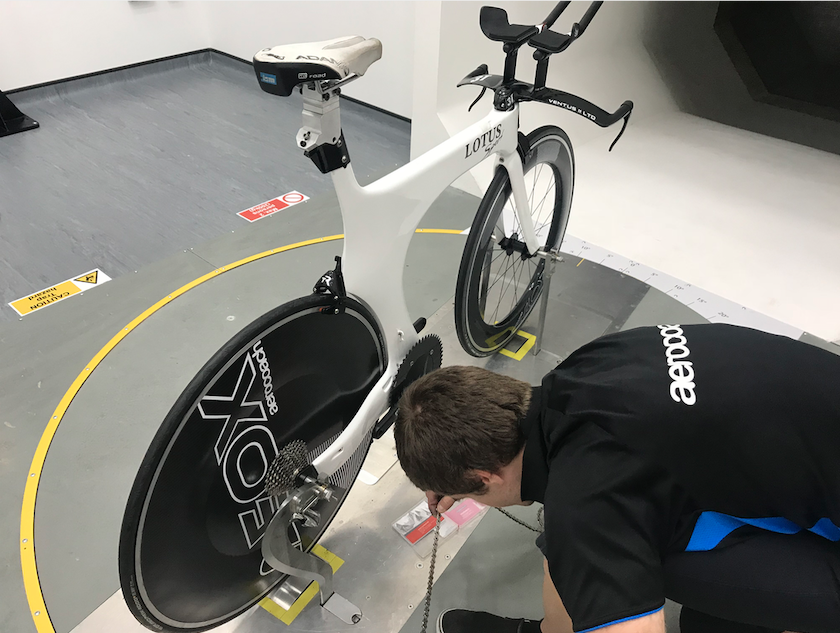 Other companies also came into the fray, including Zipp who made a "beam" bike using a Softride flexible top tube/beam called the Zipp 2001, followed by a limited edition run of a full carbon integrated beam bike called the Zipp 3001.
All of these frames were outlawed by cycling's governing body, the Union Cycliste Internationale in 1996, as it sought to emphasise the importance of physical effort over technological advancement, and also the appearance of bikes used in the worlds largest races.

"The performance achieved depends more on the form of the man-machine ensemble than the physical qualities of the rider, and this goes against the very meaning of cycle sport." - UCI, 8th October 1996

This curtailed development of more dramatic frame shapes in the cycling world, and although triathlon continued (and continues) to innovate with fewer restrictions placed on frame designs, this meant that in the worlds largest cycling races such as the Tour de France, bikes such as the Lotus or Zipp wouldn't ever be seen.

The goal of this test was to evaluate the aerodynamic performance of iconic bikes such as the Lotus 110 and Zipp 3001 against a modern frame - the Cervelo P5.

We tested three bikes in the wind tunnel, with a pedalling rider and spinning wheels at 45kph. In order to just test the difference between frames, we set the position of each bike up identically, and used identical components wherever possible.

All the bikes were set up 1x with an AeroCoach ARC chainring, AeroCoach AEOX wheels and 3T aerobars. A Cervelo P5-6 model comes equipped with 3T Aduro bars, and we used the (UCI illegal!) 3T Ventus bars on the Lotus 110 and the Zipp 3001.

One of our team riders Dan is the proud owner of a Lotus 110, and has done exceptionally fast times on it in the past!

This particular frame has been custom painted in gloss white, with a custom seatpost clamp manufactured to achieve the saddle height required. A Tririg Omega front brake and cable was installed as well as a rear brake.

This Zipp 3001 has been ridden by a number of AeroCoach team riders, including director Dr Xavier Disley and Alex, the test rider for this experiment. Both have held their 10 mile personal bests on it in the past!
The forks were swapped out to an aero Kinesis aluminium model, rather than the round tubed fork legs specced on the 1996 bikes.

This particular Cervelo P5-6 was previously owned by Ironman triathlon superstar Frederik Van Lierde. It has integrated brakes front and back as well as handlebars designed specifically for the frame.

We chose the Cervelo P5-6 to compared against, as having completed countless hours of testing over many years we know it's one of the fastest frames on the market. 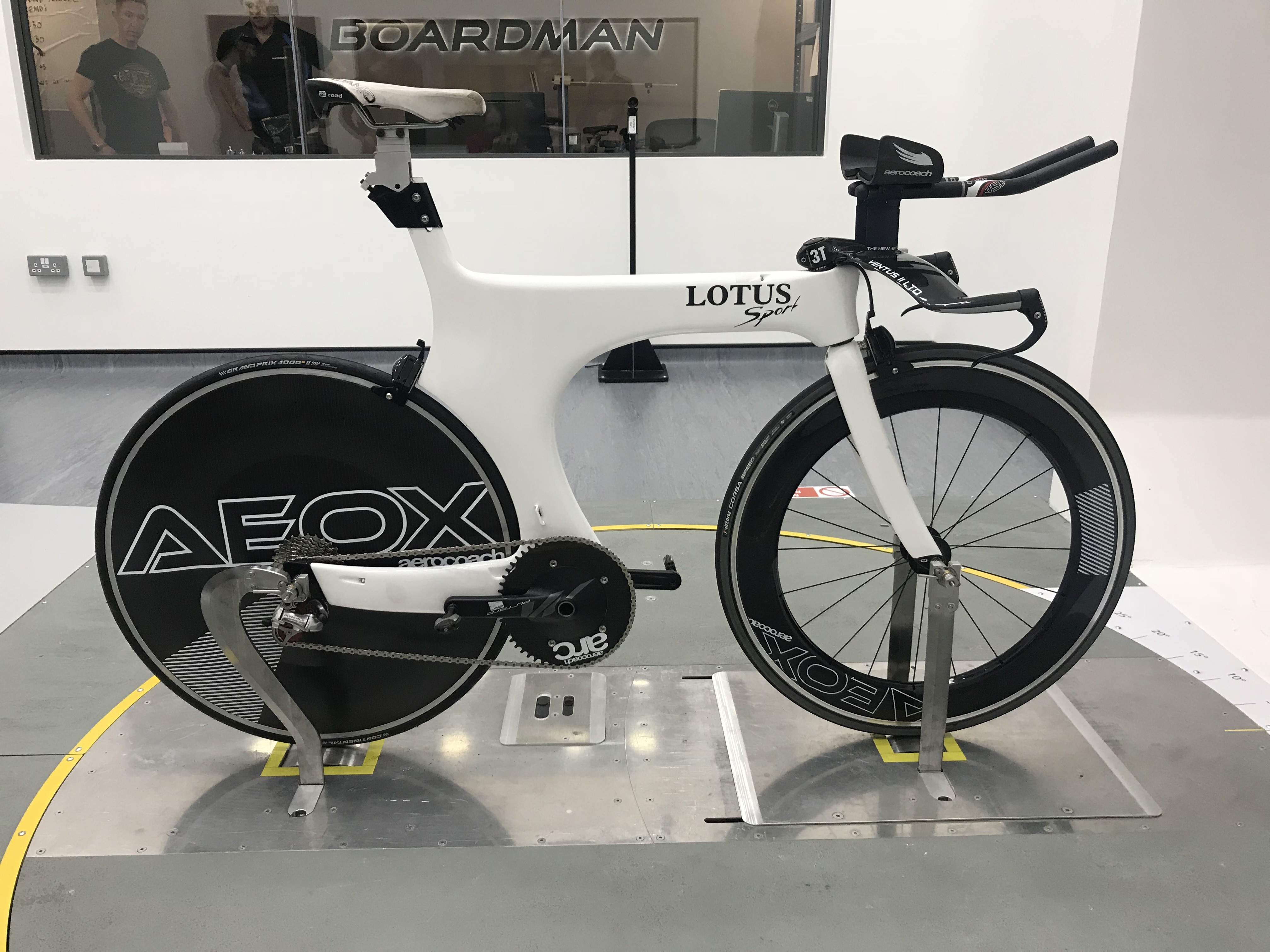 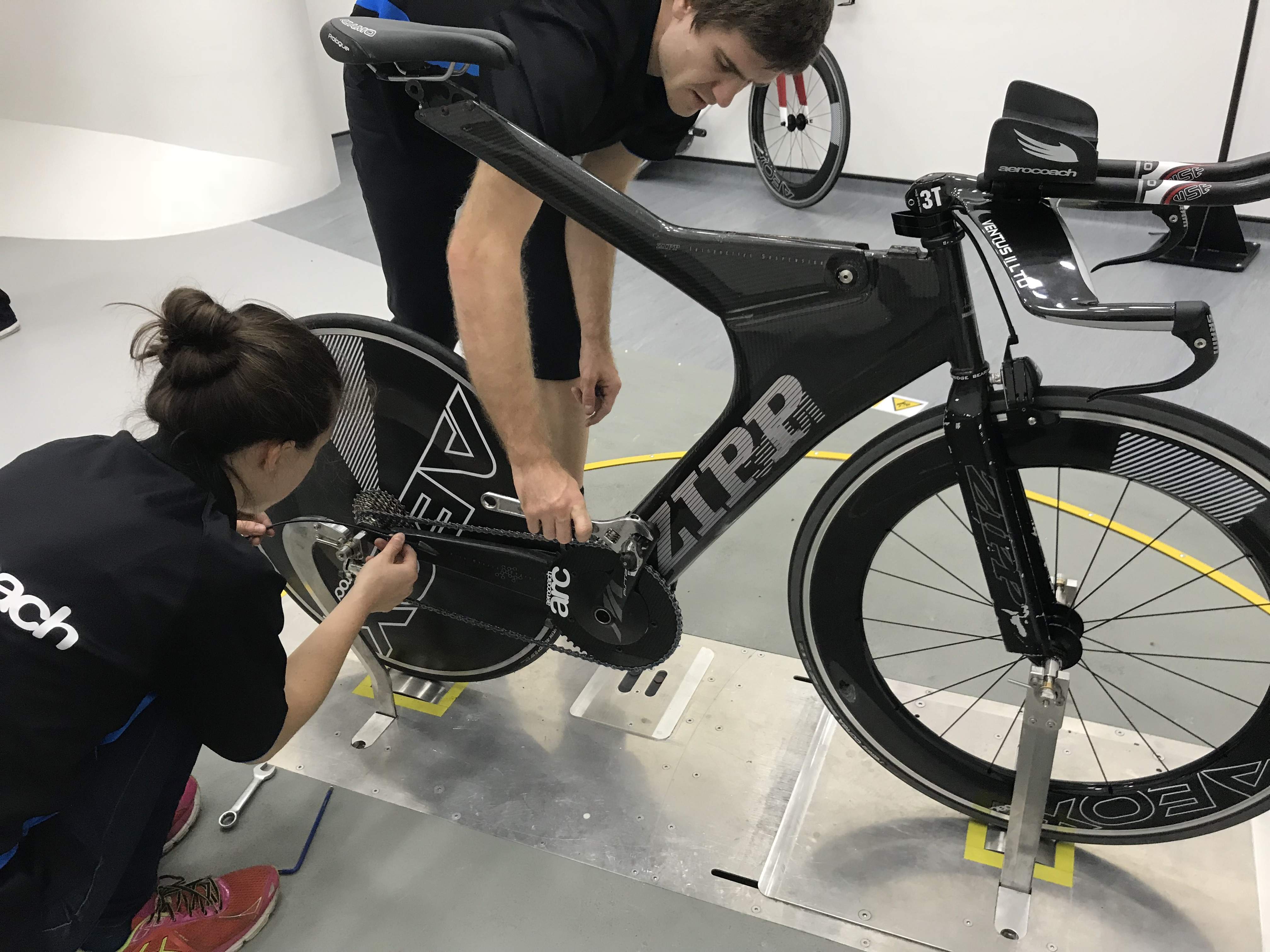 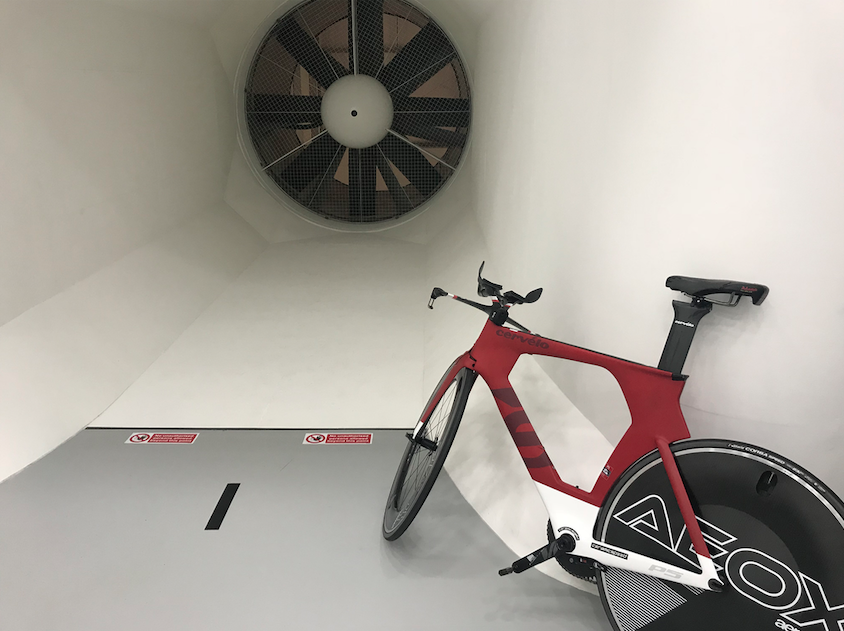 We tested the aerodynamics of the bikes at our standard test speed of 45kph. This allows us to get good clean data (compared with testing at lower speeds, where the resolution isn't as good) which can then be applied to lower speed calculations later. As an example, a 10w aerodynamic drag saving at 45kph is equivalent to 4.7w at 35kph. 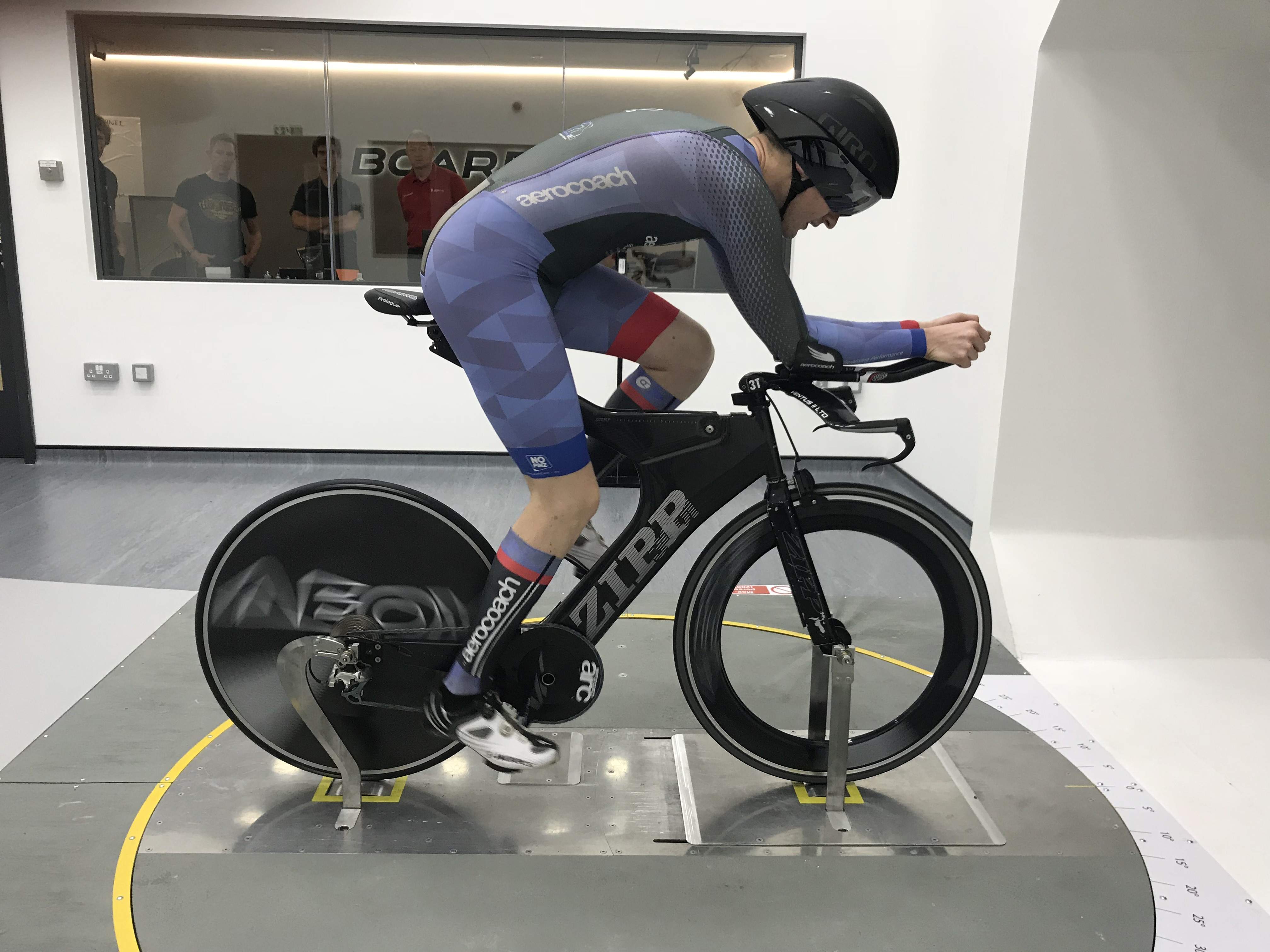 Our test rider was Alex, a time triallist from the AeroCoach team. Alex raced on the Zipp 3001 for a number of years, but also enjoys a TT on a road bike to mix things up!

Alex is an experienced racer and has completed aero test sessions with us before, so was used to staying consistent on the bike, ensuring that the data was as accurate as possible.

We completed multiple repeats over a range of different yaw angles to give as complete an overview of the performance of each bike as possible.

Results from the wind tunnel test between the three bikes are shown below.

When interpreting wind tunnel results it is important to understand yaw angle weighting.

The picture to the right illustrates this process:

While cycling on the road, you will experience a range of yaw angles. Very high yaw angles are much less common than lower yaw angles, and this can be expressed as a weighting function - for example at 45kph you spend ~80% of your time at 7.5deg yaw or less. At <40kph this extends out to 10deg, and at >50kph you will see 5deg or less. 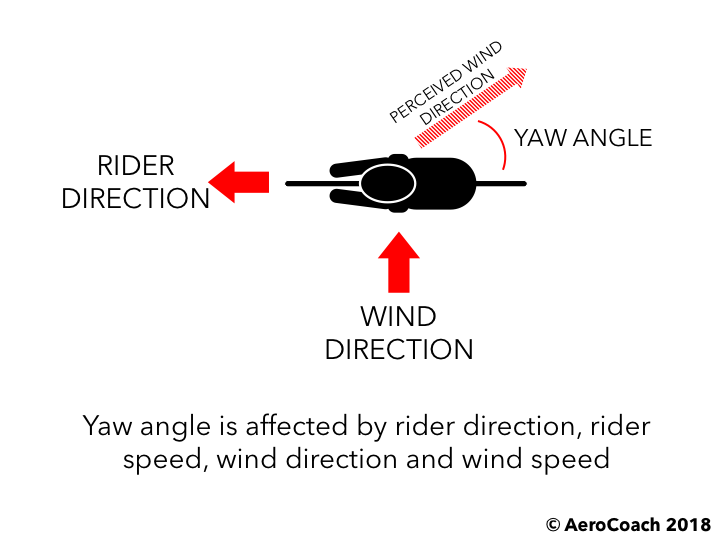 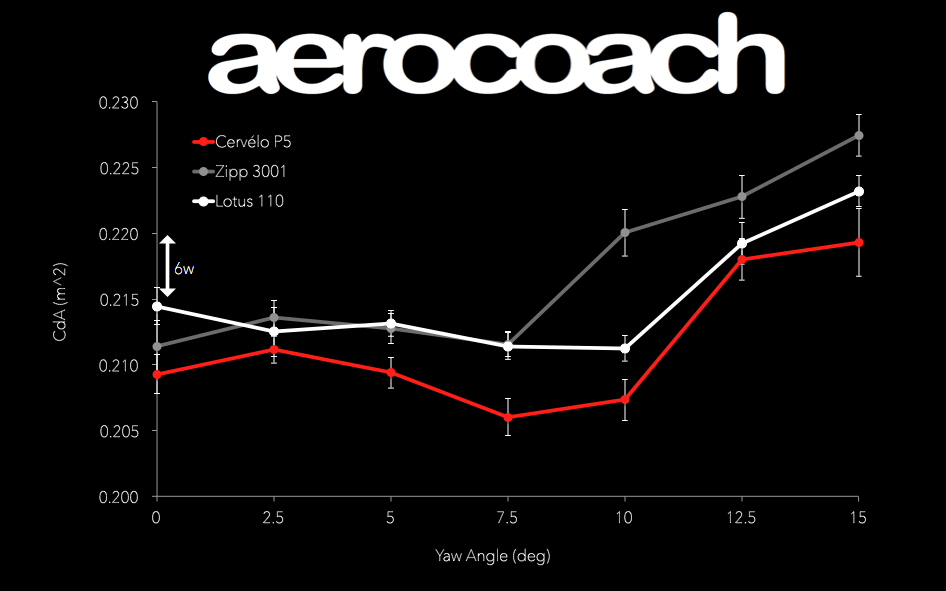 From this data set we can see that the Cervelo P5-6 is consistently faster than the Lotus 100 and the Zipp 3001, at all yaw angles.

The Zipp performs particularly well at 0deg yaw: this is likely due to the incredibly narrow (28mm!) head tube.

Once the yaw angle increases the shape of the Lotus creates a larger difference in aerodynamic drag between that and the Zipp. 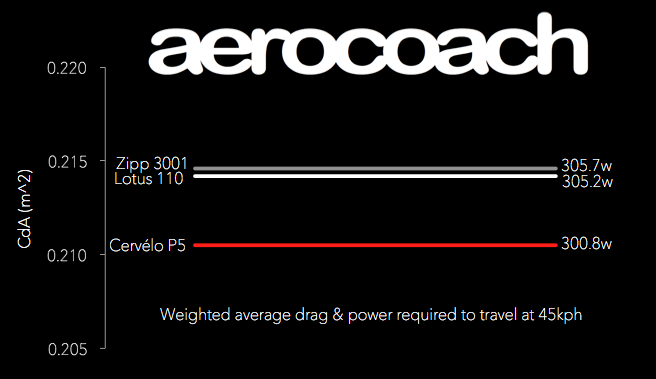 Using a yaw weighting function, to provide an overview of the aerodynamic performance during typical outdoor wind conditions, at 45kph the Cervélo P5 was the fastest, followed by the Lotus 110 (4.4w slower) and the Zipp 3001 (4.9w slower).

Compared with one of the fastest frames on the market, some of the older bike designs are still race worthy, providing less than a 5w aerodynamic drag penalty at 45kph!
As the global cycling and triathlon market continues to innovate, the question remains whether 25 years into the future we will see a similar kind of improvement, and how regulations and new technologies influence frame design and manufacture.

We hope you enjoyed reading this article, as we certainly enjoyed completing the test!