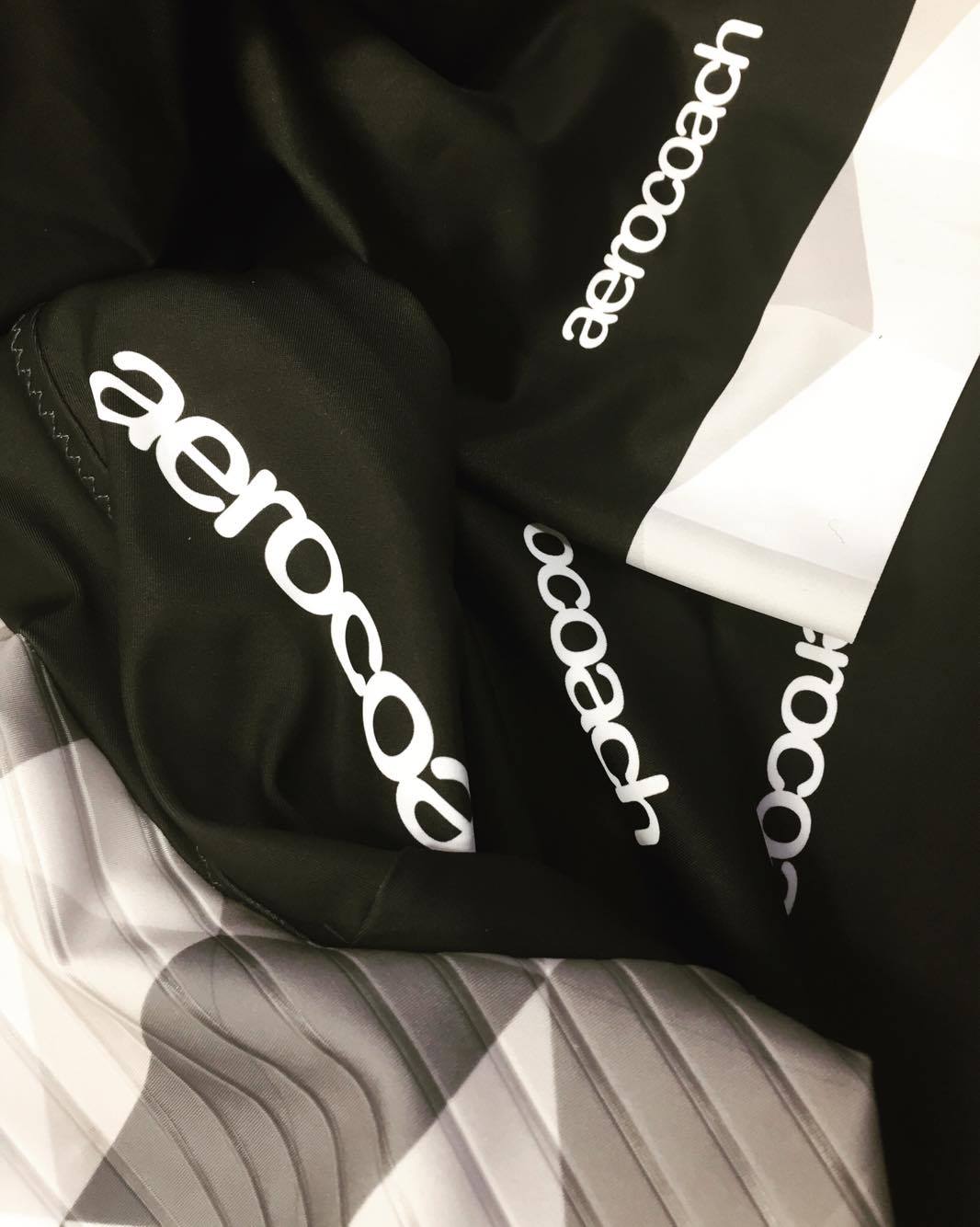 The AeroCoach Tripsuit, manufactured and designed in conjunction with Nopinz has been a revolutionary upgrade and ridden at all stages of competition: from local races to the Tour De France, World Championships and Olympic Games, taking World and Olympic records, wins and podiums along the way. 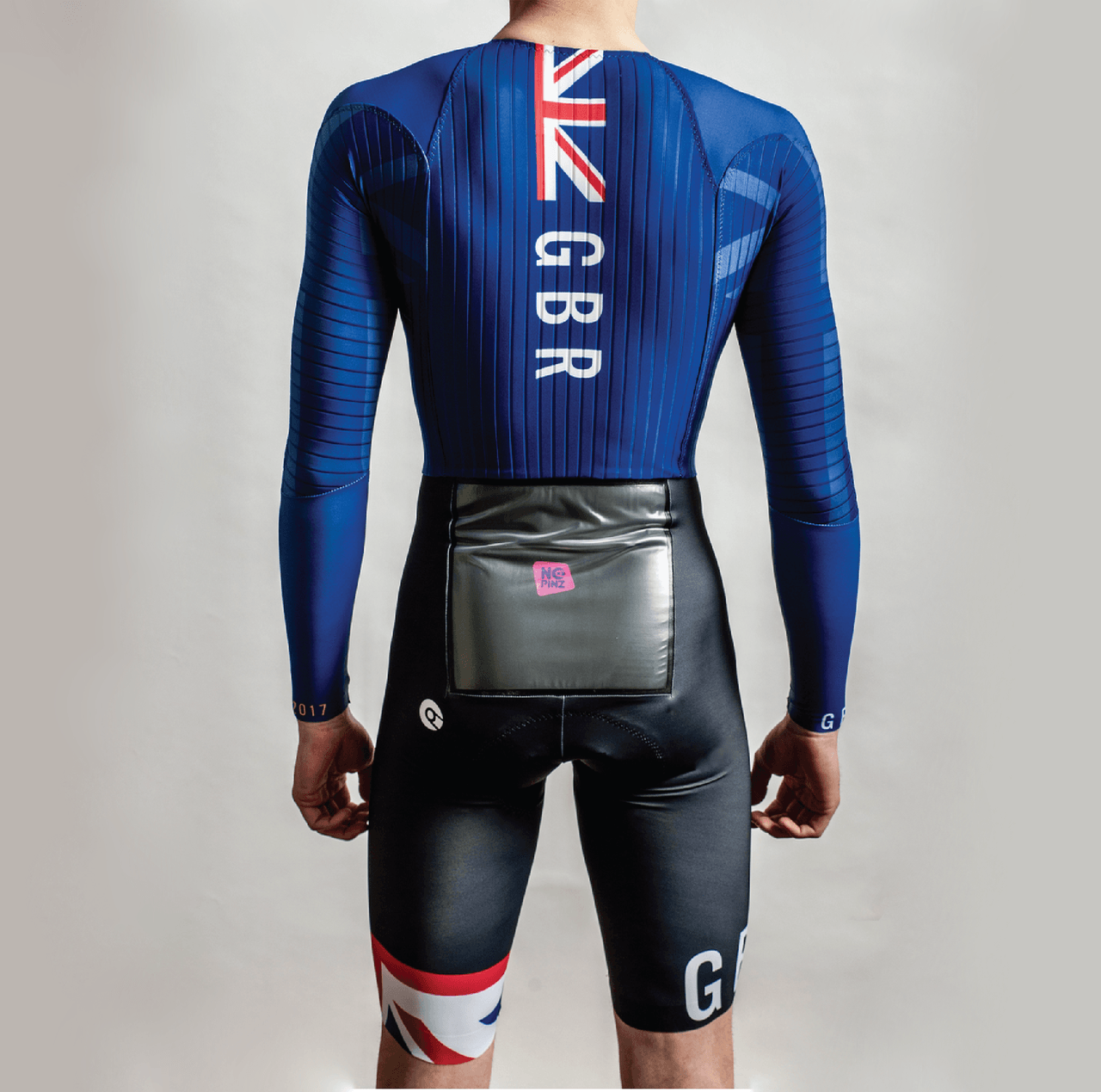 The history of the Tripsuit begins in 2015, culminating in a full day’s testing at one of our session locations in Newport, South Wales in June. After extensive discussions between AeroCoach and Nopinz the project was born.

A variety of different riders were used to establish baselines over the entire Nopinz range (including the Speedpocket, arm number bands and current skinsuit offerings). Modifications were made based on previously conducted CFD analysis and outdoor testing to locate and establish optimum seam locations to reduce aerodynamic drag. 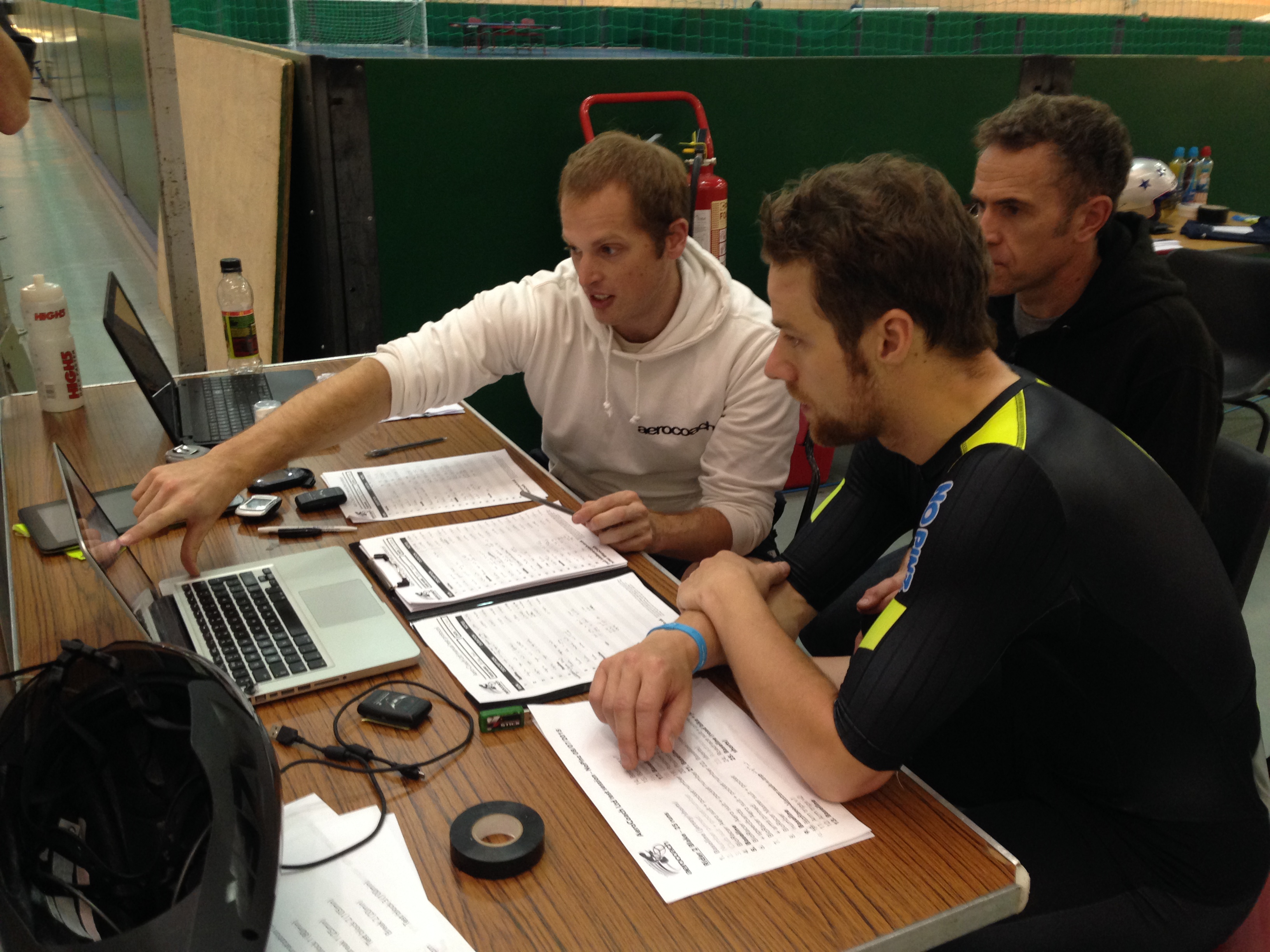 A variety of different rider shapes, sizes and aero positions were used in order to establish the fastest design irrespective of individual characteristics.

“Tripping” the airflow over the human body, described as a bluff body in aerodynamic terms given its non airfoil shape, lowers drag by converting “laminar” flow to “turbulent”. As the air moves over a location on the body such as the upper arm or top of the shoulders, clean and straight laminar airflow hits the body, follows the surface shape and then detaches, leaving a low pressure wake past the point of separation. This low pressure wake causes an increase in aerodynamic drag. By converting the laminar flow to turbulent before it separates, this low pressure wake is reduced in size, lowering aerodynamic drag. The zone to reduce separation is clearly defined in CFD and can also be visualised in wind tunnel testing using wet paint on mannequins or riders. AeroCoach uses the protected and UCI legal ATS® system of seams and raised edges to trip airflow on a range of products.

High pressure areas are shown in red - the front of the aero helmet, hands and front edge of the upper arms.

Separation of the airflow occurs as the pressure changes from high to low (red to blue) over the tops of the shoulders, lower back and also the sides of the arms. 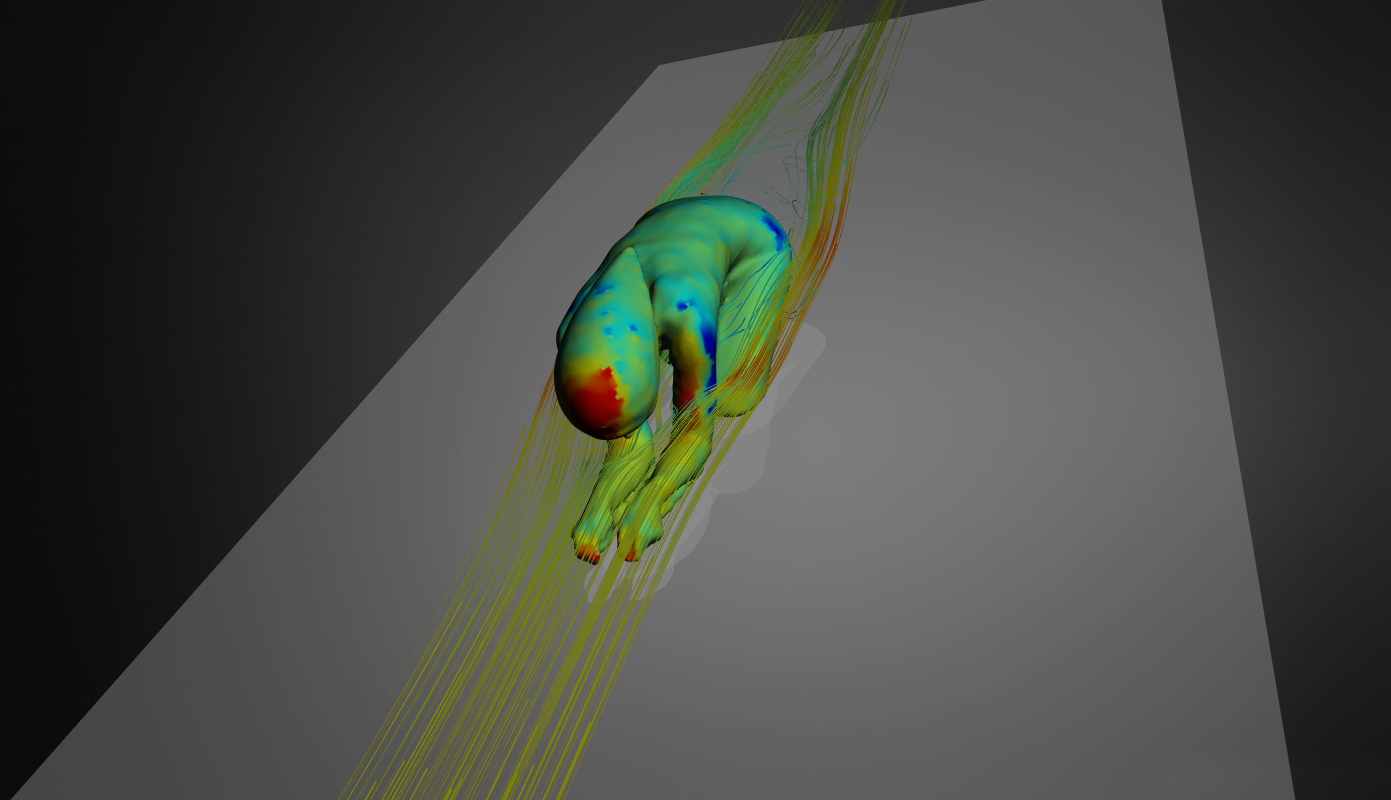 Once the concept and initial analysis had taken place in the computer and on the velodrome it was time to create products ready for testing. 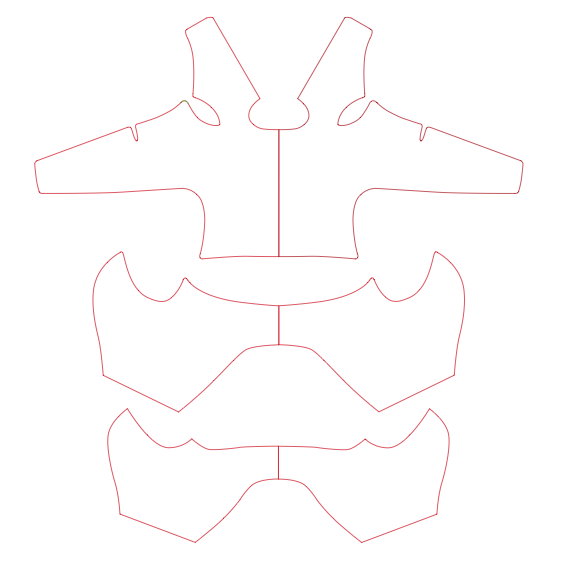 Templates were drawn up at Nopinz HQ in Barnstaple, Devon, and sent over to the AeroCoach HQ in Bromsgrove, Worcestershire. 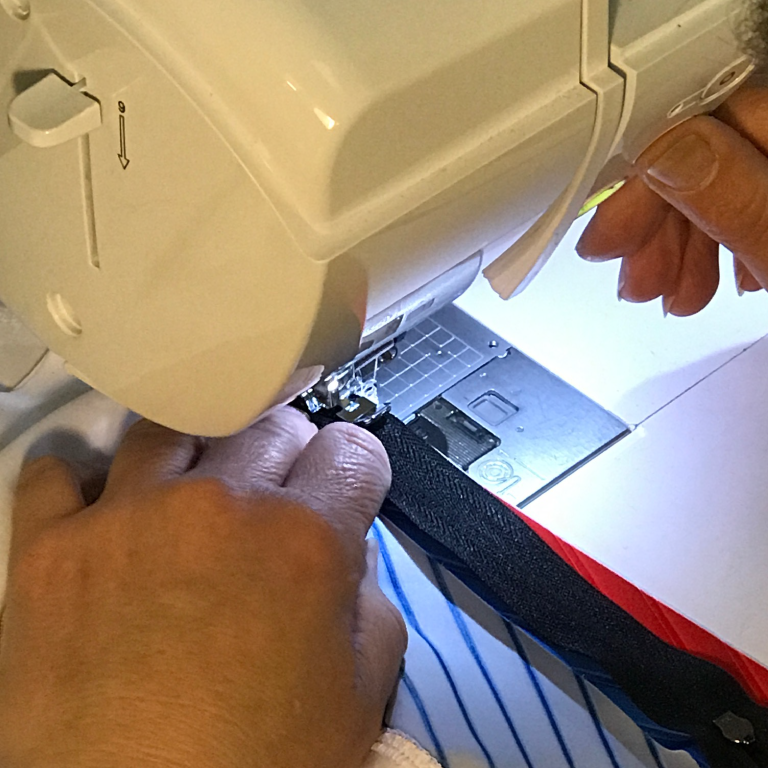 However there were some failures - a suit with a rubberised finish was fast only at a very narrow speed range (52-53kph) and slower at all other speeds.

We found that suits from other manufacturers were inconsistent in their performance across different riders. Our optimal ATS® placement also began to change depending on the size and elbow pad width of the test riders.

After months of work we were able to establish two completely different suit designs, which allowed us to make the fastest suit for your body shape.

A "Closed" Tripsuit is for a small riders, or those with closer aerobar positions – in these cases the airflow is directed more around the outside of the rider rather than through the arms and underneath the torso, so the pattern has ATS® on the outside of the arms only, and due to the increase in airflow over the tops of the shoulders there are V sections of ATS® which are moved high up the back.

On an "Open" Tripsuit (for larger riders or those with wider arm positions) extra ATS® is placed both on the inner edge of the upper arm as well as the chest. Due to more airflow being directed through the body rather than over the back as in a Closed suit, ATS® on the back is moved slightly lower down. 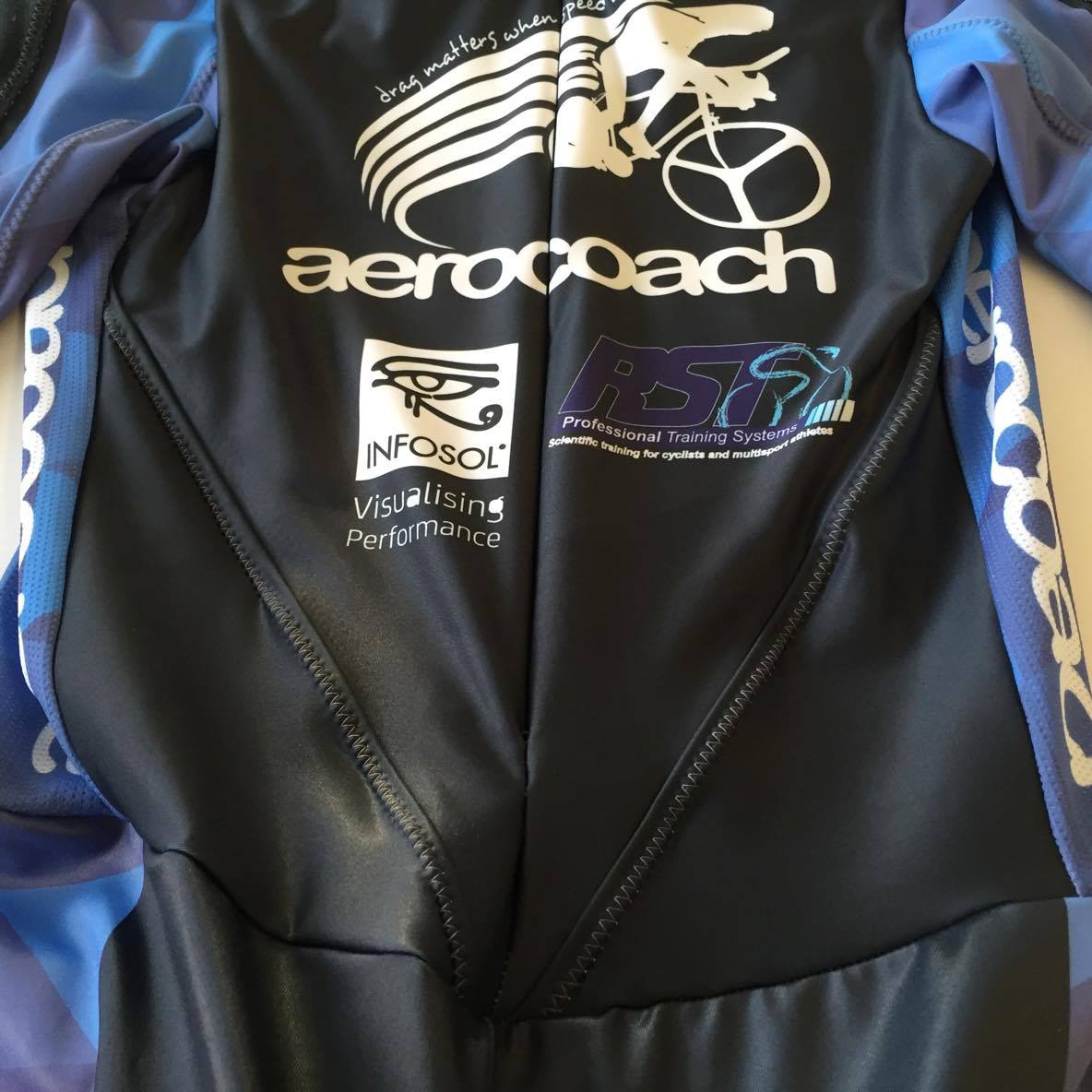 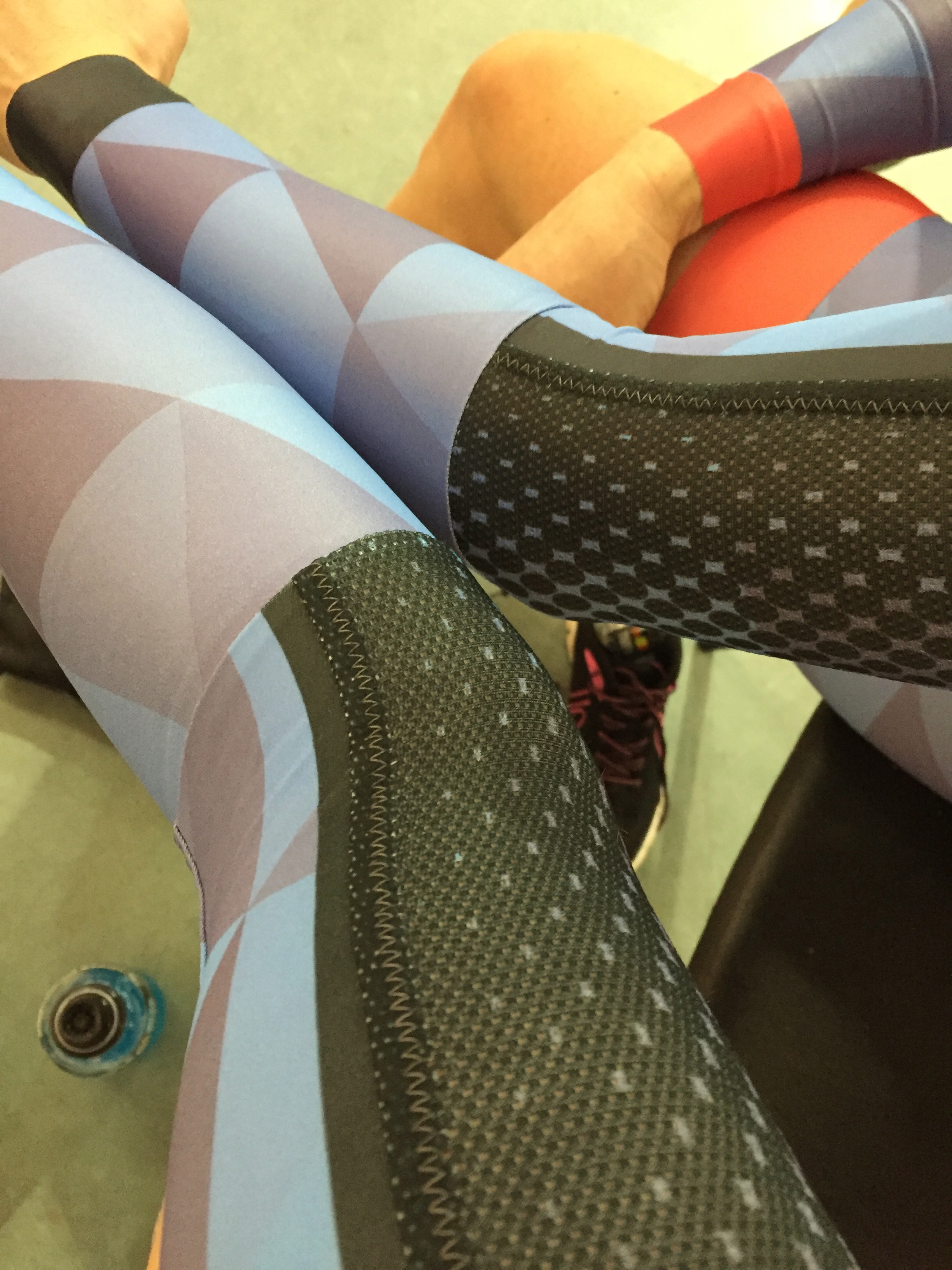 ATS® placement on the upper arms fell within a 30-40mm zone with no appreciable effect on aerodynamic drag, meaning that suits were quick regardless of how they were worn.

Never before or since has a company taken the step to provide a choice of suit design depending on your individual morphology and aero position.

The new suit released in 2016 was 2w faster than any available competitor, and provided a string of victories both nationally and abroad. 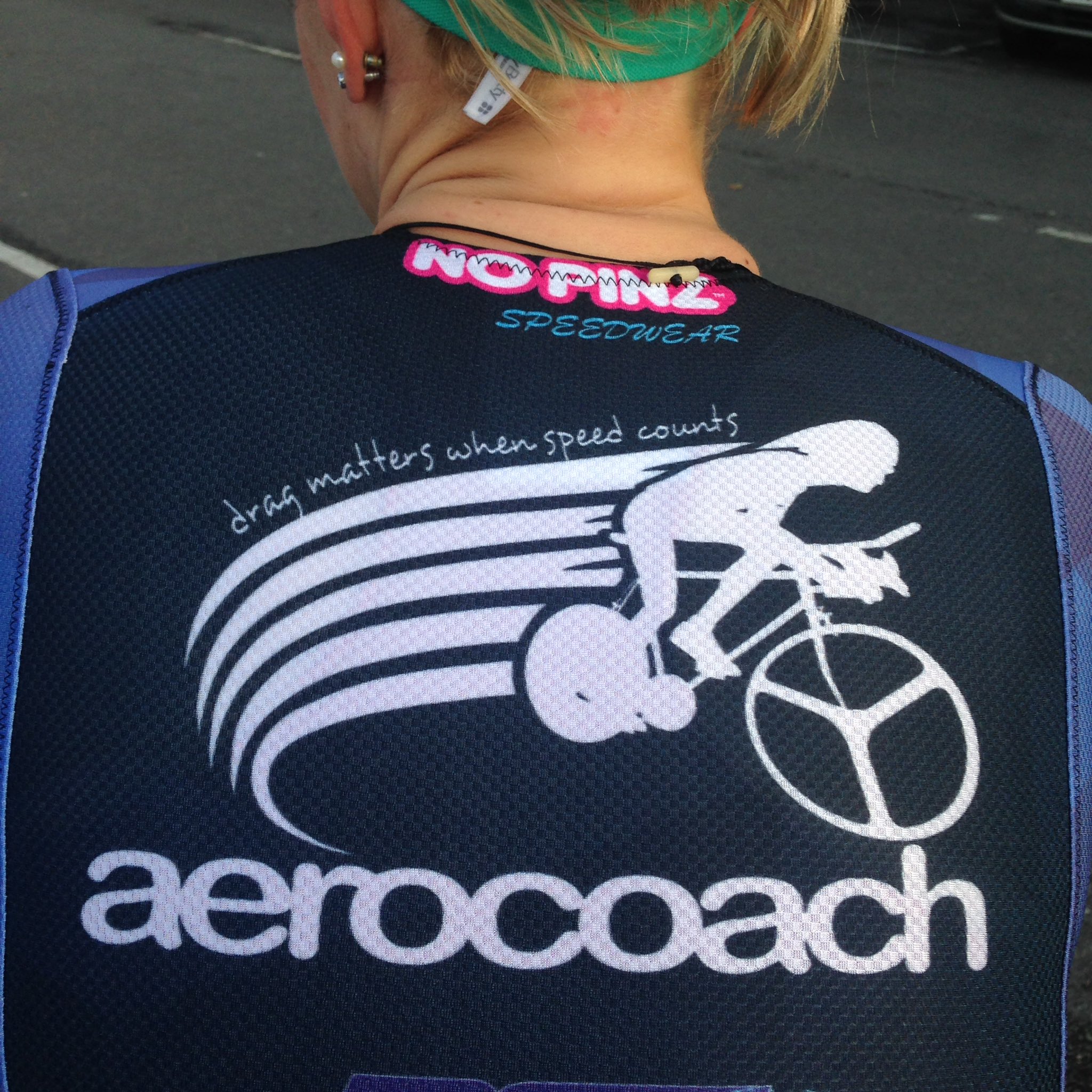 Hayley Simmonds won the UCI National Time Trial title, Richard Bussell won the National 10 and virtually all the podiums at CTT nationals had a rider wearing the suit.

An Olympic Record on the track
was also broken!

In 2017 two suits became available to rival the Tripsuit, causing another round of prototyping, track testing and wind tunnel analysis.

The 2016 suit was a huge amount faster than the original reference baseline from 2015.

With a slight change in cut, hem location and materials the 2017 suit surpassed this by nearly 5w, placing it back at the head of the pack. 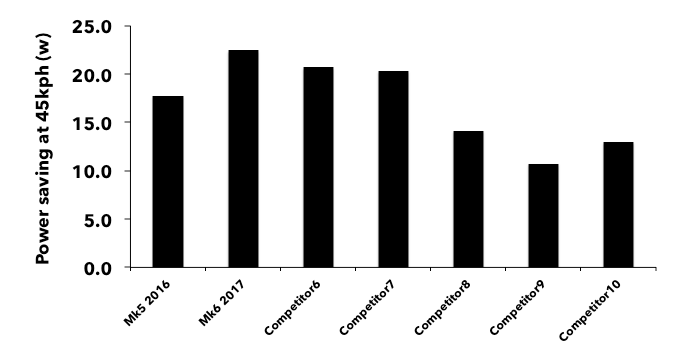 Even more races were won with the Tripsuit - in the record breaking fastest ever CTT National 25, over 70% of the senior men's field were using an AeroCoach product.

The teams at Nopinz and AeroCoach have continued their passion for high performance with even more prototypes being made in order to stay ahead.

Our constant advancements in fabric technology, CAD design, CFD and real world aerodynamic analysis allow us to develop even faster suits in the future.

Causing 70-80% of total drag, rider surface aerodynamics is the one of the most important aspects to optimise in order to improve your cycling performance. 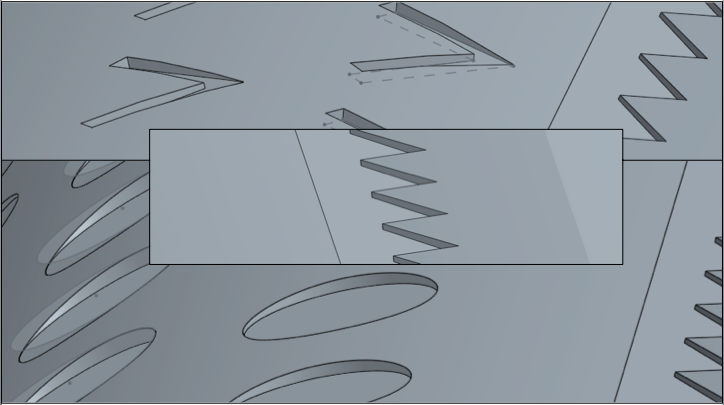 Head to the Nopinz website to select your sizing and colour for the iconic Nopinz/AeroCoach Tripsuit - a perfect partnership for unrivalled speed.